Can I hold your hand?

Make no mistake. I liked the stories, the cut-scenes and the idea I was part of a story, maybe not always as participant, but I kept a good idea what the story was. I remember that in the pre-zulaman area (when we had to walk till level 40), I often had no idea what the story was about, I just was flowing with the quests, but often not reading further then what to do.

Now I read all the quests I encountered in cataclysm, they where part of the same story, and I read it like a book. For that matter, vanilla was like reading a lot of books at the same time, while cataclysm was reading one book at the time, before you continued to the next book (with the exception of Uldum where two stories walk side-by-side)

Now both TBC and LK where somehwere inbetween. To continue with books. TBC read like you are normally reading comics. Lots of little different stories after each other. While LK read like several books, while sometimes you took a comic besides the book. And yes, in this line, vanilla was like reading your complete comic-book collection at once.... which is a lot for me.

Now the problem ofcourse arises, that if you need to read a book, you normally need to start at the beginning, and read it to the end. There's no way you can skip a part, books are not written that way. And that is exactly the problem with Cata-questing at this moment. The road you need to take is written, and needs to be followed. So if you want to level in Cata, you are only left with two options, follow the questline or level through dungeons.

Yes, I know that you can choose between two 'starting'-zones. But after that you need to take deepholm, and at least a part of either Uldum or Highlands. And yes, for every one out there who wants to raid, doin all of the Deepholm quest is a must, something to do with shoulder-enchants.

Now, this is not that a big of a problem for most players... but... well... if you have altism like me, it can became a drag to do the deepholm quests for the umptied time.

Now, I know the past was not good. The forced levelling through Hellfire was not fine, and I destroyed those portals enough, but at least there you had a choice to skip stuff. Don't like the quest, or the reward, just skip it. In Cata this choice is taken away from you. You need to follow the questline.... no more free will....

Well, ok, I did skip ONE other way to level, through professions. Mining, Herbing and *gasp* Digging, gives experience, and you can level through that I suppose...

On the archeology... 3 BiS-gear pre-raid can be solved by archeology. 1 dorf, 1 Nelf and 1 tolvir. It's all RNG, and for that matter, Tol'Vir digsites are rare....very rare.

Back to the topic, for a fast finish. Luckily levelling from 80-85 is fast. So before you are actually bored, you are level 85. But does the game really begins at 85 then?

Well... after almost three years, it maybe was time to change a little bit...

And the fact that I am committed to boomkinning at the moment, well...

It does kinda feel strange, I logged into Gowron last night, and put his ceremonial gear on (lvl60-PvP stuff). He has been my main for almost 4 years. even when I was playing around with other alts, I always returned to him. Even making him a dorf for some months. Problem is though, that ever since I left Ghostlands (as a player), Gowron has been lost. Not really bound somewhere, and all his deeds done on another server.

I always remember him as a part of Retribution. Playing with Kemwer,Sceptre, Nagkeen,Rasout and Jorky...

Now, onto my new main.

Mardah, the balance druid. Where did she came from?

Actually, Mardah is one of my oldest characters, she was made in the summer of 2005, just to see the Night Elf starting zone. But, as with a lot of my former alts, left at low level, three if I recall. This was on the server Khadgar. For those who actually followed this blog, you already know that after my raiding-time with XII, Mardah became the character I played. She levelled up, hit outlands, and was transferred of to Argent Dawn to play with friends.

I reached 80 with her, and did some ICC-raids. Nothing much. She became Crusader, played around. The amount of time you have when you are not preparing to raid is actually large. Then Cataclysm hit. And I decided, I could raid again. So I looked around, talked to a friend.... put in an application, got accepted, started preparing for raids.

Preparing for raids... I now have 3 epix. Two from the dorfs, one selfmade. At this moment, some of the BiS-equipment is found by Archeology, the BoA-epix. So that's what I am doing now..... digging.

And this all happened in the last two weeks....

And yes, this name is also Star Trek related. Mardah was the dabo-girl Jake dated on DS9, who later was accepted to the Bajor Science Academy...

No more dependant on stupid PuGs, which often dissolve after 1 wipe.

So, last night I did 4 heroics with my new guildies (or about 4). We didn't AoE the trash down, but CC was also not used often. I even got my first heroic achievement: Arrested Development, which needs you to kill the three guys with Corla before you kill Corla (evolving adds).

Talking about Corla.... she still has the bracers I want. The only 346-bracers for resto/balance in the game. Yes, there sgould also be a BoE drop from Tol'Vir...but rumors say they don't drop.

Look now, I am talking about gear, well, I am getting myself ready for raids now.... Today I will get exalted with the Highland Dorfs, so I'll get my first 2 epix :). And I must start hunting Trinkets....the two I want most are from Grim Batol and Blackrock.... so I probably need to que for those before I do a random.

And I need an option for my Justice Points. Don't need them for gear anymore...

And on a different note: read this.
At the end it says: ONLY FOR CRAFTERS WITH SKILL 525, nice...
Gepost door André op 08:02 Geen opmerkingen:

So, I have been making lightshows in heroics the last few days. And there are some things that spring to mind.

First off, if I get one boss down in a heroic, I consider it a succes. The number of times wipes occur, or that you are invited into a 'dungeon-in-progress', which dissolves after you zone in. Or the tank that leaves because his shield didn't drop.

Luckily, I just did a streak (with a tank from AD) of three dungeons, where the name of this blog really was true. We wiped some, we learned, we succeeded. It also helped that the tank/healer+ 2 DPS where constantly the same, just changing 1 DPS between dungeons.

...now I only need a guild to do that. Well... maybe... I did put an application somewhere, which hopefully rejoins me with a friend.

Most heroic bosses have the same basic principle. Kill Adds, stay out of bad, and sometimes, get into the good. There is a real big difference to what most DPS are accustomed to. DPS on the boss is not that important. Burning down adds, and your own survival is.

If you have to choose between a damage-spell and a healing spell, the choice is already made. If you have to think about it, heal yourself. Help the healers, stay alive, stay out of bad.

Now, as a Boomkin, I have a lot of stuff to help healers. Healing myself up, popping a Tranquility if needed. Casting a glyphed Solar Beam on trash. Rooting....(My Bear bar is three buttons: Growl, Nature's Grasp, entangling Roots), sleeping if needed. Control the damage. 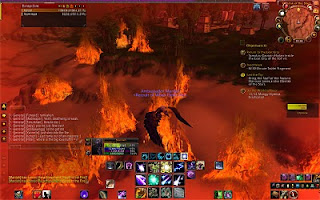 I am no stranger to love...

Yes, we have been rick rolled... well, if you did the Vashjir-quests.

Gowron went Hyjal(complete)-Deepholm(complete)-Uldum (till 84)-Highlands and was 85 last friday-night....

I find it tedious to tank, and I feel I don't have the piece of mind to do many tanking at the moment. I did level some alts up after that. My hunter to 81, and my SP to 82, but damn, do I need a lot of ore for those three.

Actually.... I find my lazer-chicken on the allie-side much more enjoying at the moment, has to do something with the Flying Form. I did some dungeons with her, and yes, the last word is not out yet, but they seem a lot more fun than mindless wrath-spamming... and now of to Uldum.
Gepost door André op 16:30 2 opmerkingen:

While questing on one of my now numerous low-level alts, I came across a goblin inn, and found the food-stash in the back, well... I remember something like: you shouldn't sleep with glob-flies... I don't think they should be above your food... 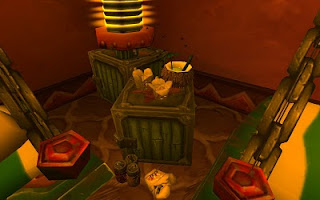 And after a week of long log-in, Argent Dawn got their free transfers of, good new for me. So, my shaman,warrior and warlock, accompanied by my lvl60 undead hunter went to steamweedle cartel, to make room for new alts.
Gepost door André op 21:36 Geen opmerkingen: