Mr. Stormrage and the Scourge

Last night we had a serious try on Illidan. Because I had enough BoJ's lying around, I made myself a 199-fire-res gear, and together with Harrisgr, we went dancing with the Elementals. I was surprised I could block their attacks :P, and after some tries, we got the kiting under control, with the help of Sajuuk (who hasn't got a fire-res-kit yet).

We wiped twice under 20%, once at 14%. But most of the wipes are in phase 2, most of the time to badluck, like 2 Eye-beams in my kiting-path. Harris did bite the dust 2 times, but my flame was already deayh, so I could pick it up. And on one of the last tries, we lost Sajuuk, and i tanked Illidan in my fire-res gear for at least one phase :p.


...and those freaking zombies are getting annoying, not that much for Gowron, I can cleanse myself, but when I was on my Huntress today...yeesh. Oh well, we are now in stage 5, and I hope the next stage will bring the cure.
Gepost door André op 17:22 Geen opmerkingen:

Rocking in the Free World


Scourge Invasion, part 3 or 4... new boss in Karazhan.
Prince Menethril or something, just kite him through Moroes Room to the ballroom, every raid member should be behind you, very simple.
He drops 2 BoJ's, a Vanity-pet... and a Guitar :p 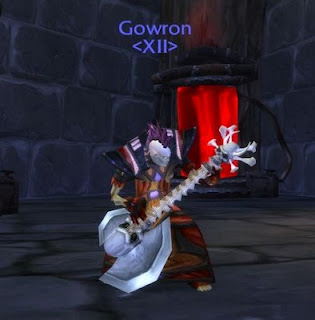 /rant on
...oh, and FFS, stop qq-ing about Retridins in PvP. Next patch will NERF THEM TO THE GROUND BABY, and not only the retridins, the tankadins and healadins will also suffer.
FFS, if you cant kill a retridin in PvP, rethink your strategy... KITE THEM, or fear/slow/stun whatever, yeesh, the times i have been killed by casters is numerous, oh, its really fun, DoT/DoT/fear...and again... or being frozen or...
/rant off

The real problem is ofcourse, that unlike other classes, retridins have all the tools for level 80 at their disposal at the moment, most of the last 10 Points are for utility (kings/poj/bom/etc.)
So, yes, they are OP, a nerf should happen... but... holy still needs more dps, which aslo will be nerfed now, and we tankadins are getting nerfed, while we dont even now all our new spells/abilities yet.

And now, some pictures from last week:

First up, THE reason I emptied my DKP:

And yesterday I joined my guild into Black Temple once more, XII had cleared it to 7/9 the previous week, so up to the council, which we 3-shotted. I was assigned to tank the rogue...BORING, pick up with shield, tank 10 seconds, wait 30, and repeat :p, but here's the 1%-kill shot: 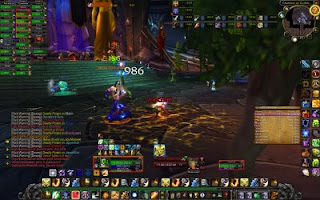 After that, we ofcourse went to Illidan... although we didn't had Fire-res tanks.. but it was nice to tank him :p. 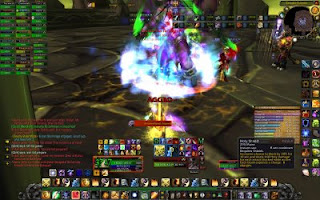 And ofcourse a nice pic, just the 2 of us :p 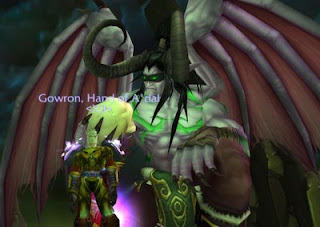 And, not to forget:
The ashes of a'lar dropped from Kael, we rolled on it (it's not gear, so the officers decided to do a roll 1-25, and give it to that raid slot), and my old friend Littlen got it: 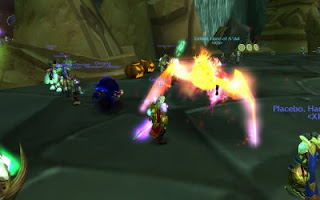 And now... our fire-res-gear is being assembled... we where not prepared...but we will be next time....
Gepost door André op 10:26 Geen opmerkingen:

Yes, I am one now, last night we killed kael, I got the quest, a guildie the ashes of al'ar... pics later, I am off on vacation.
Gepost door André op 07:40 Geen opmerkingen:

So... on a saturday-night-raid, we killed Vashj, and i solo-tanked karatesh and adds.... i'ts very logical that this happened, all bosses in TBC are nerfed to the ground...

Well, not as much d/c's as I was expecting, and XII was eager to try all the new skills, so there went 25 brave souls to Mount Hyjal.

My UI was as basic as you can get, only added Omen, DBM and Pallypower. And the nice thing about the default UI is that its 24 buttons wide... exactly what you need for the 969-rotation.

So here comes the trash, and I was spamming consecration, Avengers Shield, HotR and Holy Wrath (instant now), and the first packs went down within 30 seconds.... no manaproplems whatsoever.

And there came Rage, picked it up at the top of the hill, and start spamming my buttons..and after 2 cucles, my mana was low... but my threat was skyhigh, I think about 40-50% more then number 2 on the list.

After getting focused again after a server-shutdown, we downed Anetheron in 4 minutes 39 seconds....

I did needed to change some gear, I changed my:
belt (was crafted spelldamage, now BoJ-warrior)
sword (was pinky hammer, now Season2 PvP-sword)
shield (was runeshield, now the zul-aman)
chest (was 2.3 BoJ-reward, now 2.4 BoJ reward)

And I maybe should change the Pocketwatch to the Beerfest Auto-Blocker...

All in all, I lost a lot of health, but gained a lot of threat,
avoidance still is roughly the same, but with 1200 AP, I can actually do some damage.
Need to find out how much on mobs...

Oh, and the 969-rotation needs me to hit a button every Global Cooldown... I need to get used to that, and find a lay-out to make it easy to do...

This will be my new spec today:

I did not take the abilities that mentioned Shield of the Righteousness, ShotR will be available at lvl75...which I am not :p

The road to the tier6-talents
Well, lets do a run down.
Divine Strength 5/5 ; Anticipation 5/5 ; Toughness 5/5 ; Imp. Righteous Fury 3/3 , you will take at first. But you need 25 points to get to the tier6-talenst, you just spend 18, and 1 will go in Sanctuary, leaving 6 points.
The tier4 talents are all good talents, although Divine Guardian can be a suicide-talent :p. Hammer of Justice now also functions as an interupt, and Imp. Devo Aura doesn't stack with the tree-aura, and you still have Kings to consider..
I am leaning towards Imp. HoJ 3/3 and Imp. Devo 3/3, mostly because I have already been without Kings several months, and I am specced maintank, not buff-monkey :p.

I put ONE point into Imp. Judgement for the new 969-rotation for Tankadins (more later I suppose), and the point in Seals of the Pure are offcourse for more damage/threat.

When WotLK really hits, I'll spec like this: Levelling-spec
This spec puts a lot of points in mana-saver, which means faster levelling.

And probably I'll end here: Level 80-spec
Yes, one point still floating.. but there are rumors, Blizzard will give us a new 11-point talent, which is really missing now.

No internet at home, but I'll will give a quick rundown on seals/judgements from memory, and sorry, no tooltips this time.

Judgements... yes plural, you will now have 3 different spells called judgement of justice/wisdom/light, instead of the spell called judgement. Each Judgement will place the apprioate debuff on your target for ?? minutes, and it will NOT refresh if you hit it. If you use a judgement, there will be a damaging factor depending on the current seal you have up. The Seal will not go away after casting a judgement, it is now a longer-lasting selfbuff.

Some Seals have been reworded to Hand-spells, so they no longer conflict with seals (Hand of Protection/Hand of lets-keep-running), these are still short-lasting self-buffs.

Cya later (they say my internet is incoming now :p)

After some research, and some more, I am finally ready to make this post :p

First lets start with the new ability we get at level 75:
Shield of the Righteousness [ooh, tooltips].
It does holy damage equal to your Block Value

And now lets look at some well-known talents of the Tankadin:
Seal of Righteousness,Seal of wisdom,Avenger's Shield

ShotR clearly states that is uses Block Value for Threat.
The 'Old' Seals will be using both Spellpower (SPH=Spellpower Holy) and Attack Power.

So first up, we still want spellpower.. but we got a nifty new talent called Touched by the Light, which gives us 30% of our stamina as Spellpower. Looking at Gowron with 1337 stamina at the moment, that will translate into 401 spellpower, which is 123 lower then what I now have.. but still, for 3 talent points, 400 spellpower... WOW. All our damage is still holy, so this adds nice to threat. But... do we really want spellpower on our gear now... NO we don't.

Meat your new friend for tanking, it's called Strength :p,
first the hard figures:
2 Strength = 4 Melee Attack Power = 1 Block Value
but, wait, add Divine Strength,Improved Blessings of Kings and we get a new formula:
2 Strength = 5 Attack Power = 1.25 Block Value.
So not only will strength scale better with every damaging tool we have, it also increases the BV to a great length, which we now also use for threat.

Blizzard has changed all the stats on Spelldamage Gear for Tankadins to reflect this, all of them have now Strength, and No Spellpower... but... our spelldamage-weapons will be absolete.. they will ofc not be changed, they still can be used, but we got a Tier11-talent which actually says, get rid of spellpower weapon, and get a def/stam high dps-weapon.... Hammer of the Righteous.
You want a HIGH DPS-WEAPON for this, and most of the spellpower weapons only have a DPS of around 40.... I hope to get me the S2-sword, but any 'Warrior'-tanking weapon will probably do, get a dps of around 100, and you are settled methinks.

So here you have it, Think Strength, Not Spellpower.

Oh, and we will be loosing 20 defense, because Anticipation now gives dodge instead of Defense... another reason to get the S2-sword, to remain uncrittable. And we dont have to worry about crushing blows anymore, only mobs FOUR levels higher then you can crush... and Raid bosses are considered to be 73...err, 83 :p