Oh, and the next patch will give us Ulduar, and some nice revamps of our abilities, the nerfs Retridins needed on lvl70 are not needed anymore, so some have been reversed.

Well, us Tankadins have a nice new word: Block Capped

So now I am going to throw a lot of new calculations your way...NOT
remember 102.4%, the old uncrushability-factor, well, now its called block-cap.

What does it mean, well very simple, if you reach block-cap, EVERY hit will either be a miss, a block, a parry or a dodge, so you never take the full 'normal' hit of a boss anymore. Depending on your Block Value, you will take less damage/hit. It's so simple.

Tankadins on the other hand can now have Holy Shield up ALL the time (last 10s, CD 8s). That means we will take damage of every hit (for T7 around 1200-1500). Thats a lot less damage-intake then a warrior (our eternal nemesis).

Now remember the old rules, when you reach Block Cap, the first to be absolete is Block. So get that 102.4%, but dont go too much over it using Block Rating. Actually, it's the same as in TBC, use BR to get there fast, and then replace BR with dodge or parry. But I think dodge/parry is still better, unless you can reach Block Cap. So if you are sitting near the Cap, and you have to choose between dodge/parry or blockrating, look if blockrating gets you over 102.4%. If yes, take BR, if no, take dodge/parry.

I didn't play WoW this weekend, instead, I went out with a friend, and lost 3 days to having fun, and happiness.

Personally it feels good, and when I logged on last night, I couldn't care less about some of the level80's in he guild now. No regret for having fun with a friend. I played for 3 hours, getting another 50%, and just getting me to level72, and again I missed it. Just like when I hit 71, I was congratulated by a friend, and my first respons was: what, why?

I found another piece of upgrade for my retri-set, but normally, everything I get is sharded. I have the luck to get enough stuff from friends to shard, but I am not really yet levelling my professions.

I am however in Dalaran, we used the BG-trick to get in. Friday it was still quiet, but last night, the crowd was already bigger. But do yourself a favor, and go to Shat... for the peace of mind :p. I dont think this Citi will be visited much anymore, so why not blow it up :P

Aftre 1 hour loading, I finally entered WoW. 3 empty bags, retri-gear (sans weapon/shield/libram), and of I was, quickyly picking up master enchanting/fishing/cooking/first aid/blacksmithing. Not that I am gonna level BS soon, but it gave an achievement :p

I started at Vengeance Landing, and it was less crowdy then I thought. Somewhere along the road to New Agamand I saw several turkeys, so I quickly killed 15 :p.

There is a real irritating quest in NA, walking between a table and a cookpot :p, and the /1 LF Anton, was hilariuos. LAter on the evening, I went the Utgarde Keep (named UK, looking for tank to UK???, You want me to tank the United Kingdom??), and also completed the Nexus, fairly easy instances. Along the way I picked up a Blue Shoulder for my retri-set (wOOt, first replacement), and I encounterd a defense-shoulder, almost as good as T6...almost, it's now a shard.

after 4.6 hours playing, I was at around 75% of the next level, exactly like planned. And I found the XP in instances not satisfying... now where the &%&* is the FP Borean Tundra :p
Gepost door André op 11:48 Geen opmerkingen:

Just a quick note, my hunter reached 70 today... and 2 hours later, she had the achievement of Zul'Aman :p, gathering up the haste-cloak, the leather-shoulders and a fist weapon :p

I did around 700 dps, which was low for the group, but pre-patch, that would be ready for T5... oh well, all my goals for WotLK have been reached.
Gepost door André op 22:25 Geen opmerkingen:

Because I was Raidleader for T5/6 I have a lot of pictures on my HD, including the dates when we first killed a boss, so, lets get ready for a trip down memory-lane.

[b]Februar[/b]
At the beginning of februar I joined XII, within one week (one reset) we cleared Karazhan, thsi was around the 20th, and we also started to do some ZA-runs. Our first 2 kills there, where with me as a Prot-specced Healer on the bosses, while tanking Trash, that meant we only took 2 real healers.

[b]March[/b]
More ZA and Kara-runs, halfway the month we killed our third boss in ZA, Halazzi and his 40 birds. And at the end of March, we finally got enough people to do the next thing. I think we had 3 to 4 tries, and then it clicked, we downed HKM, and we had our first 25-man kill.

[b]April [/b]
We downed the 4th boss in ZA, and had released 3 prisoners. Gruul was still eluding us, something with too much melee-dps, but at the 22nd, we went one step further. After several days wiping, everybody now understood the meaning of SPOUT-JUMP, and we killed our first T5-boss.

[b]May[/b]
At the beginning of may, me and Kemwer looked at the Guild-Calendar, and then filled it for a complete month with raids, scheduling sunday till friday. We also decided that all 10-man-raids where no longer being organsied by the guild. XII would become a 25-man-raiding Guild.
At the beginning of may we payed a visit to the last 2 T4-bosses, Gruul and Maggy, and downed w/o much problems. A week later we got our first T5-token in the guild from VR, and a week later, we completed the retard-check Solarion. Hilarious first wipe on Sol, because of tradition, Hellcatherin (lock-officer) decided not to run away... Hilarious sight, seeing 20 people go airborne...and splat :p.
But May was not over, on our third fun-night to MH, we actually got wave 8 down... so there came Rage Winterchill... and after we wiped, we did it once more, and she went down, making XII the third Horde-guild on the server to do that.
But wait, more may-news, we also killed Morogrim (gief Murlocs) and Hexlord. And ofcourse the boss-kill we should be proud of as guild, Hydross. The guild was actually farming materials for the resistance-sets for me and Egonspengler.

[b]June[/b]
In the first week, we killed Karatresh, Anetheron and Zuljin, and on the 12th we downed Alar. Later in the month we also downed Leotheras (Avengers Shield FTW), which made us SSC 5/6, TK 3/4 and MH 2/5. Due to vacations, serious tries on Kael and Vashj where no option, and a lot of raids got cancelled, so we just farmed on.

[b]July[/b]
On the 12th, me, Placebo, Deweg, Jorky and Hitman, downed Onyxia :p. But the next end-game boss had to wait until the end of the month. Because we where now doing MH regurlay, the officers decided to go to Black Temple, for some serious tries. So after a lot of bubbles and spines, we killed Najentus.

[b]August[/b]
Still Vacation, so some raids where cancelled, and raids that continued didn't had the right balance. But we had one of our most succesfull raiding weeks. 3/8: Kaz and Az, 4/8 Supremus and 5/8 Akama. But then vacation really hit, ending with me stepping back as RL, because I was moving.

[b]October[/b]
Lolpatch introduced, and we killed Kael and cleared Black Temple after that. Only one boss remains...

[b]November[/b]
...and there he goes. Last Night, XII killed Archimonde, I was busy somewhere else, but I was listening to vent, hearing the voices, and the thoughts, who is gonna screw up now...but Archi went to 10%...and the wisps took over.


It has been a blast with XII this year. We did things we didn't thought we could do. I thank all members that have been in XII this year, that helped us achieve, what we have done.
And ofcourse, a special note to the Retribution-gang:
Kemwer,Pinkangel,Jorky,Gullvi,Warak,Morhen and Egonspengler.
Although most of you are gone, thank you, and cya in wrath :p
Gepost door André op 15:20 Geen opmerkingen:

...and again we get nerfed.

Well, if you want to know about all our nerfs, go visit the official forums. Retridins had to be nerfed, but in the progress, both tankadins and healadins also got shafted... So it seems Blizzard does have an idea where to go with Paladins, but have no Idea how to get there.

I now have heard several stories about Tankadins quitting, because they are fed up with all the
Gepost door André op 11:02 Geen opmerkingen:

We still havent got Archimonde down, we got him to 30% on Tuesday, with 18 people in the raid, so less chance for fuck-ups, but Archimonde is both a survavibility-check and a lucky-check. It's mostly bad luck that prevents us from killing him :(

On wednesday we went BT again, and 3 hours later, with one wipe on trash (one pack to much) and 3 wipes on council we had cleared till 7/9 (yes no council). I got myself a nice libram that will serve me well in WotLK. Thursday in again, we hadn't enough healers, but enough fire-res tanks, so I respecced to holy for the night. 1 hour later, no wipes, we had Illidan down again.... and then we lost 45 minutes of raiding because of the next two pictures: 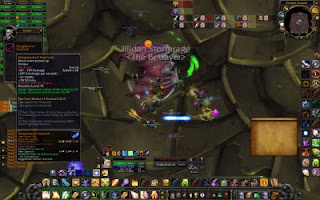 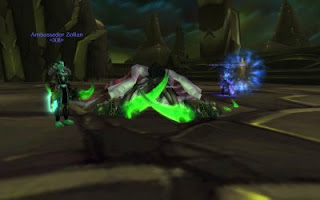 Congratulations on Zollan, he was very quiet for the rest of the night :p. The officers decided that we couldn't have an unenchanted Warglaive in the guild, so I enchanted it with mongoose with gbank-materials.
The last hour of the raid was used to kill 3 bosses in Mount Hyjal.

Friday we originally planned to go to MH, but it was friday, so people came on late, and we went Onyxia/AQ40 instead. There's a thing about old-world instances, everyone wants to see them, but tbh, I don't like tanking them. People forget to watch Omen, and it went that bad, that I actually left the raid for 10 minutes to cooldown. I play a Maintankadin, my game is to stay in control of the situation, and in normal raids I can do that, the DPS is then focused enough to watch omen (most of the time), but in old-world-raids, they tend to forget omen, so after the third time that I had the dps open up before I actually controlled the mob, I needed to step out.

We cleared up until Chtun, where we arrived at 0.00, so a lot of people left. We actually wiped several times on the emperors, to get the fight down. emperors is a fight where tankadins shine, they can tank both, because we do both physical and magical damage. But, let me give you a tip, dont use Seal of Corruption, it's a DoT, so we actually had 2 wipes to figure that out. A Tankadin having aggro on 2 emperors is not funnu :p.

After AQ40, I joined my Brother in Kara to kill Nightbane. I started as Prot-specced healer on attumen and the new boss. Then Caden had to go, so I tanked Moroes and Maiden with Chemp (resto-shammy) and Theoden (elemental-shammy) Healing me. After that Theoden had to go, but we continued. So, seven people left, 1 tank, 1 healer, and 5 dps. And we got Romeo and Julliet, which went down fast. Up to Nightbane, one of the 2 endbosses in Kara, and we killed him, with only one healer...It feels more like an heroic now.

Sunday we have SWP planned, although I probably can't make that, and next week, I put a BT-raid in the calendar, it's been a while since I have organised a raid...
Gepost door André op 10:03 Geen opmerkingen: