No Nef for me

So, I am not in a very fast guild, but I had hoped we could have killed Nefarian pre-4.2. Alas, the raid just finished, with Nef at 30%. We are getting into Phase 3 constantly now, but one mistake means end raid.

Now, one of our Rogues is going into Night-shift, one goes on a 2 week-vacation. And me and my friend are going to Roskilde Festival this weekend. That means that from 4 people who are normally in the top5 DPS are gone the next two weeks....

So, after the Horde-experience, I started levelling a human warlock. So, first the spoiler warning:

Behold, Bunnies will tell spoilers ahead.

So, there she was (yes, female, I just can't stand the human male form), standing before the church, ready to go battle wolves, orcs and...mmm...wait, Aznam? An Imp, nice. So, the first zone is mostly the same, some new quests (did I mentioned Orcs), but mostly old... just a better flow. Eastvale logging camp has a FP, so you get there much faster. A lot less running around, although I have the feeling, it is still a lot. Oh, and you don't kill Hogger.

Onwards to Westfall, which completely changed. A long story is told here, with the start-point being a murder, and the end-part is actually in Heroic Deadmines... what, lore-wise, was most striking, is that the humans have a big problem, lots of unhappy citizens. If you look at ogrimmar. most orcs are rallying for battle. The humans are begging for food. Oh, and what is that big whirlwind-thingie doing in Westfall, no one told me?

After I found the killer, I went onto Redridge Mountains. There is a very nice questline here, with you being in a squad of soldiers, ready to kill a lot of orcs.... to bad the quest at camp everstill bugged out... and because I was already on the level-treshold, onwards to Darkshore...rrr...shire (see what I did there ghostlandiers).

Now. I never did this zone often. back in the days it was a lot of running, yes RUNning, between Darkshire and Raven Hill, even taking a detour to Moonbrook Village. That changed, hurray. I actually only used the road from east to west once, they put a FP in Raven Hill. With the new Gilneas-faction, the Worgen-story is more prevalent here, and a lot of quests seem follow ups from old ones. Oh, and on the old spt north-west, where some quest used to be, a rare spawn was killed.

So, after saving a soul, my lock went to the Jungle. Before I knew it, I was knee-deep in killing Kurzen's people, and slaughtering the local Wildlife for the Expedition. And they needed a page... A PAGE??, ONLY ONE??? So, I needed to find only one page, to be precise, number 14. Great... how long should that take? So I killed my first tiger and looted the page. (Insert random nightmares from pre-cata about trying to find that one page that no one had that you needed to complete the book).

And there she is now, Northern Stranglethorn (they divided STV into two zones, although it is a little strange on the map). I do have the feeling that I will outlevel N-STV, because she is lvl 29.65, and only 50% of the map is visible at the moment. Oh well, laters....
Gepost door André op 20:08 Geen opmerkingen:

And here is another attempt of mine at movies...

Looking at this (and other) movies, I came to a very logical conclusion:

Why do I need all that information.... and why do I not even notice the clutter of info? I cleared some of it up now, so I hope the battlefield will be clearer in future movies.

-Yes, I am completely trying to starfire one of our own priests.... whoops. The start was a littlefast, and at that moment I was trying to figure out if I actually had started recording.

-I think one the second ooze-spawn, I heroically forget to dps and safe the raid... or at least one, by Typhooning a stray ooze back :p

-I also noticed that I actually focus more on oozes NOT reaching the raid, then actually dps-ing them, I should actually wait a second longer to actually hit the damned slime with my shrooms. So the fight has three phases for me: 1-blast boss;2-blast adds;3-OMGaddsmustnotreachraidshroomtyphoonsunfirespam

And it seems I sometimes actually remember NOT to leave Solar, just before oozes span (pats own back)

-mmm, It seems I accidentally hit Typhoon in the last Phase. Little mistake, hey I am human....

-And for the record, it was the first pull of the evening...

I left Morshando in Feralas.

After battling Cho'gal (see next post), I was one level to low to continue. Maybe I should not have skipped the quests in the Desolace? So, I entered the LFD for a dungeon or two. Luckily, to keep in spirits, I got Dire Maul. After completing, a level was gained.

You actually get transported to a little place where some Taurens are fighting, and then off you go to a barge in the middle of the shimmering flats...rrrr...waters? There are two major stories here, you do some pirate-stuff, and som Tauren-stuff. But the best part is: 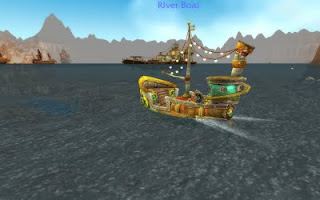 You get your own River Boat. Just cruising along, nothing beats that to set sail to the...oh wait..only in 1K.

So, after all the Pirates, some Ice-creams, and some other old friends, Morshando was off to the desert...well...at least what was left of it. Tanaris still has you battling pirates, and killing some bugs. And there is also a quest-line explaining that two-part sword from Zul'Farrak. You also help the Bloodelves in some archaeology-digs, and have to enter the old doors of Uldum.

And some has read to much Herbert: 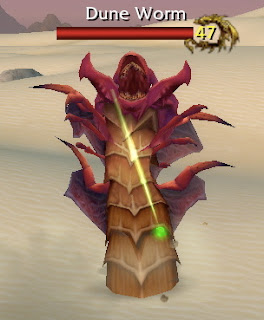 In Un'goro some things changed, but you still have to kill a lot of dino's, be aware of the Ninja-saurs. Do some mud-diving, and help a Paladin... actually a quite fun quest. The collect-the-colored-stones-quest has a new ending, which was rather well done lore-wise. But, as in Feralas, one level short to continue, so some dungeons later, I was on my way to Silithus. Mind you, this was as lvl54.

Now Silithus has a warm spot in my heart. Not because I actually like it, but because almost all my characters dinged 58 there. Some just after running through the elven village, others longer in. And, of course, Gowron has been farming here for cenarion Circle reputation.

Off all the zones, Silithus has changed the least. I didn't find a quest into the leven village, but you still have to clear the roads by killing tons of wildlife. And kill the Twillight Hammer for fun. You also encounter some bugs, and a nerfed Pincer. And when Morshando reached lvl 55.95 (just before 56), he was done....

wait a moment... I am done... two levels short of Outlands. shouldn't there be more quests here? Actually, the achievement only needs 18 quests (1 more then Alliance-Arathi Highlands). So it seems this was it.

I do hope Blizzard is going to update this zone, it just doesn't feel finished. No reference to the opening of the gates, no big AQ-storyline...

Before I am making a real conclusion, I will first finish levelling a human lock. She's now in STV, and will continue to The barrens-Dustwallow and then up north, towards winterspring.

Last few days, I did something I wanted to do along time, levelling through questing. Before Patch 4.0.1 came out, I already had a heirloomed undead hunter do a lot of the Horde Eastern Kingdoms quests, now I made a Troll kitty, to see the Horde Kalimdor quests.

This time though, no heirlooms, only 10% extra xp from a guildperk. I blasted trough the starting zones, and before I continue....

There be spoilers ahead, mates.

I helped an old dragon in Azshara, which I actually never did that far in. Normally I just start dungeoning around lvl15, not this time I said, no dungeons, only quests...

(For all the new guys: Azshara used to be a higher level zone where bo one would actually go, because the quests where to far apart. Only lvl60's went there for stuff gathering... )

So, my kitty entered Ashenvale, at lvl23 or so.... which is way to high. How could that have happened? Oh, wait, there is something called rested, you know, the fact that you get 200% more xp when you logged out in an Inn and/or City... so, no more rested for Morshando then, and luckily, I have done the Ashenvale quests. So, at lvl25, I visited a board, and went to the Stonetalon Mountains.

If you think Ashenvale is a warzone, wait till you see Stonetalon, you are constantly fighting alliance there. And there is a nice end-quest here. 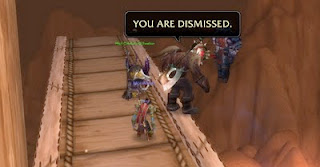 By the way, every zone is now made for 5 levels and has some nice end-quest, with a blue reward. There are also several in-between-blues. I did almost all quest in Stonetalon, and had a choice, either go Southern Barrens, or go Desolace. Morshando went desolace. 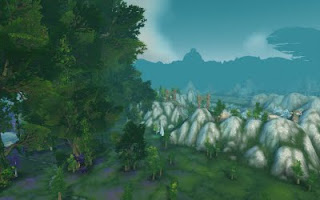 They completely changed this, very nicely done. Although there are more 'old' quests here than in earlier zones. I skipped those, united all centaurs, and went one level to early to Feralas.... wait.

In Desolace, there is a Troll town along the coast, Shadowprey Village at least had some quests. For all of you Horde playes, if you want a nice and quiet town, visit the Tauren retreat in Stonetalon. It has a flightpath, but as far as I know, no quests anymore.

So, Feralas, head-story here resolves around the Green Dragonflight. But of course, you still have to kill a lot wildlife and Ogres. And a new face... or old for me now, rears it ugly head, once and for all proving that you CAN sail East from the Eastern Kingdoms, and reach Kalimdor, yes the Azeroth is not flat. (Actually, I noticed more Azerothian Globes around). Oh yeah, the familiar face: 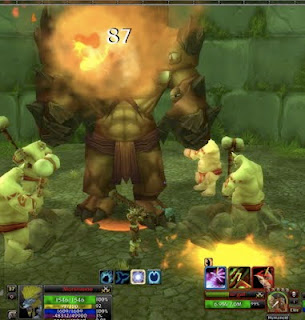