First up, I think the http://www.thedailyblink.com/ has it spot on:

Diablo III took a lot of players elsewhere, I am not hooked though, looks nice and all, but there's something missing, don't know what though...

Now, in WoW, Innovation has managed to kill Heroic Morchok-25, yes, 25 man, finally we can do that again, much more fun then 10's.

But I actually (hence the title) wanted to share my thoughts on balance in MoP.....  boring. 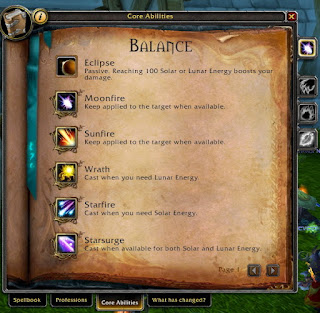 Above are our core-abilities.  Missing in action is Insect Swarm, which according to a 'blues' somewhere is being reconsidered. But with this tool box our core-rotation is going to be:

Now look at our current rotation:

Insect Swarm-Moonfire-Starfire till Solar-Insect Swarm-Sunfire-Wrath till you have below 16 solar power left-decide if it's better to recast IS/SF, or can you reach lunar with current dot's, probably not, what is the boss going to do the next 30 seconds?, ok, casting it-wrath till lunar-Starfall if off CD-apply IS/MF when IS/SF are falling off-Starfall if off CD-Starfire-Starfall if off CD-oh wait, less than 25 lunar energy left, can I wait with re-applying dot's till solar, or will they fall of too soon, ponder ok, maybe I just can make it-Starfall if off CD-cast wrath till solar-damn IS/MF fell off,shit-continue casting wrath.... and of course cast Starsurge on CD

So....  we get a lot less to think about, which for some players may be a god-send, but I actually like to plan ahead, and that will be lost. We do get some more cooldowns outside the base-rotation to manage. That is great, but doesn't actually change our core-rotation. On most fights it will probably mean hit it when ready, or wait till a certain phase, just like we tend to use shrooms and treants (and possible trinkets) now.

It seems Balance will get a lot easier to play, and I don't think I like that.