Yes, I died in the last seconds, so what : 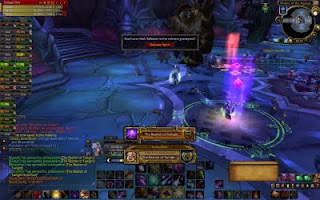 I got the key?

Ok, I find this a little bit strange news, apparantly Blizzard wants to remove the key-ring.

So, I logged into Gowron to actually see the ring again. 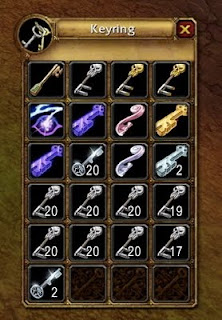 I do remember having more keys, so grabbing from memory: where is my Scarlet Key? And the key to Black Rock Depths where you had to die for (jump into the lava). But, let see what is what.

The Master's Key (#1)- Gained by doing a long quest-chain, where you had to do several TBC-dungeons, including getting the key for the Mechanar (mm, where;s that one?). Which, back before the first Zul'Aman, was needed to actually do Karazhan, everyone needed their own key.

The TBC-heroic keys (#2,3,4,7,8)- Keys needed to get into the Heroic dungeons of TBC, and back then, you needed to be revered to actually but them, not honored. Which of course was a nice way of letting people actually do normals (and getting some gear), before advancing to heroics.

Key to the Focusing Iris (#5)- Key obtained from a quest that started from a drop from Naxx10, to actually get Malygos down.

The Violet Hold Key (#6)- Key obtained after a little delivery-quest, to get into the Violet Hold, actually, I never understood the reason for this key.

All the Skeleton Keys - Some obsidium and Titanium keys, I use to open boxes. Hey, Gow is a Blacksmith.

Now the blue post said, that most of the keys will be useless. So I suppose TBC-heroics will be opened to everyone (with the right Ilvl I suppose). All the BRD-doors will be openable by everybody?? And the other keys will also become absolete one way or the other..... except the skeletons keys???

Now I don't have that many, only 12 slots, but these will be dumped into my normal bag-slots.... on Gowron.... where I always had (and have) a problem with bag-spaces? Well, I hope they let us stack the skeleton keys to 200 orso.

But, more to the point, and I quote:
Because of this, we’ve decided to get rid of the Keyring in order to free up some user interface space for exciting new features. This change could also potentially allow us to play around with the amount of default storage space you’re allotted down the road

So... you take something usefull from us, the always expanding key-ring. And you promise us something vagely in return, not even mentioning the word : SOON® 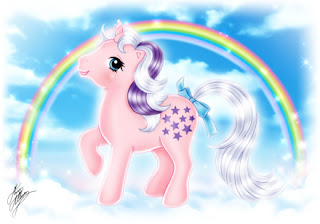 But there is one more thing I almost forgot, they stated that they will remove the keys....

And some of those key have, well, sentimental value I wouldn't say, but it does describe the feeling the closest.
Gepost door André op 21:50 Geen opmerkingen:

Yeah, like I really have time to also GM a Bloggers-guild.

Nope, after cleaning up the Gbank, and really looking at all the characters in the guild, I passed the reigns. No way I have time to also do that, I know where that leads.

Yes the rumors are true.

Last Saturday, at around 10 o'clock in the morning, I send out a ticket.

Since them, there seem to be life again, some new, some old....some older (looks around for the Steamynose-blog).

And that just after I wrote a blog, Gowron was like... retired....

You would think that after 6 years of Scarlet Monastery, people would know how to do the last part there...

So why was I tanking 2 bosses and a shitload of adds there today...thrice.
Gepost door André op 19:27 Geen opmerkingen:

Yes... not dead yet. I have just been busy with a lot of things lately, so actually writing in a blog came in last. So let's do a quick recap I guess.

Mardah still raiding 2/3 nights a week, we haven't downed Nef or Cho yet, but I don't know wether that is because we lack the skill to quickly clear the first bosses, or the fact that it was really hard to get 25 man online the last month. The last week seemed better, we actually had people to sit out.

It is also a little strange that I am not in control. Both in Retribution and in XII, I was an Officer. I am now just a loyal foot-soldier, or Tsjikin for that matter. And I do like it, not the burden of having to do stuff.

On the horde-side, Gowron is retired. As is all of Single Abstract Noun it appears. There are still some players who log in often, and it seems that with the absence of the Guild Leader Tamarind, some members have formed a new guild called Single Abstract Cow. But the busy guild it was, is gone. Maybe we'll really return there if there is again a year-stop in new content....

And of course I still have altism. But I noticed something strange, I remember having a real problem leveling a priest in TBC/WotLK, it just didn't click for me it seemed. But the last two characters that I got to 80 last year, are now both 85. Although one has become a gnome (Gnome shadowpriest on a Roflcopter rocks), and the other is back to dwarf. I also transferred a shaman back, and leveled that one from 72 up.

Yes, that means some other chars where send away. I have several 70+ and 80's scattered around different servers now, just doing nothing until I call them back I guess. I got two lower-level characters left on AD. A goblin disco-priest, in support of a goblin harry-in-the-warry-warrior. And a Tankadorfadin called Yurinov, heirloomed out, and already rockin in the mid-30's.

And now it is time to see if the servers are back online, and time to think about more boomkin-nerfs incoming.....