Sometimes, I'll step outside of WoW on this blog...

A life is like a Garden.
Perfect moments can be had,
but not preserved,
except in memory.
-L. Nimoy (last tweet)

Yesterday evening, Innovation went Heroic Foundry, and our first target was Gruul. Smashing, ceiling-collapsing, petrifying Gruul. And after a long night of running around, on attempt 15, we did the sacrifice-our-bear-tank-as-often-as-possible-strategy, and he went down. Yes, yes, the healer-rotation also worked.

Now, I wanted to analyse my performance that night. And I normally did that with warcraftlogs, but last night I used the more graphical enhanced tool from Mr. Robot. I needed Microsoft Silverlight for that, and a upload-program. Which was installed fast.

I was actually running it during the raid, which meant I could look at the results after each wipe. That's more for Raidleaders I guess. To look at my own performance I need a little bit more time, although I now know where to look. Let's look at some screenshots I took from the logs.

The above picture gives a quick rundown of the actual kill. There are 6 buttons, with some colors around it. Now, Mr. Robot compares the numbers of your raid with all the other numbers they have. Now the DPS seems low, but that may have to do with other factors than only our performance. If we are compared with Mythic Guilds who ran HC last week, our numbers will be lower.

You also get a direct rundown on how the raid did with damaging abilities. We did well on Avoidable damage, which should make our healers happy, our potion usage..well...   under that line is an interesting line, especially considering Innovation killed Gruul on the 15th attempt.... although we had at least two 90%+ wipes, as in accidental pulls. (Yes, it says 9th attempt, but the first 5 are in another log, I was experimenting).

This picture is more personalized, it does what it says. What is your DPS compared to all the other Balance Druids (for me) that we can find on Mr. Robot. This time taking in account Ilvl though.. which makes me sad. Looking at earlier attempts, I saw myself Hovering around 75%, but I had a petrify less on me, and some luck with crits it seem...and I still had a 655-weapon during the kill, not after that though. 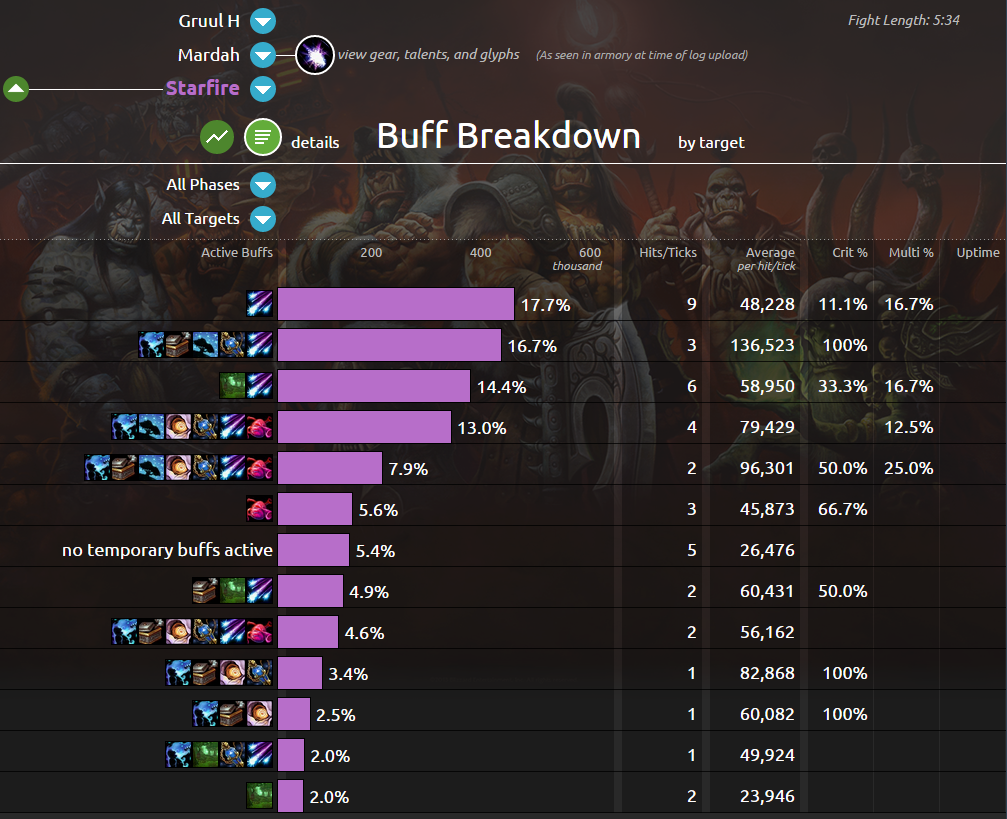 The second one I found when I looked at my Starfires. As you can see above you get this nice graph with the buffs various Starfires had. However, you cannot see if I was in Lunar or in Solar at the time of the cast. I know for sure I had some casts end up in the wrong cycle, that is not that bad if they are empowered, but an unempowered Starfire in Solar, yeah, I like to know how often that happened.

With this list, and the standard dps-list you get for all spells, I did find out that I probably had casted 8 starsurges while there was already an empowered buff active for that cycle. Now that is probably because I was running and my procs where about to reach 3, or just proc-ed to 3, but I should train myself to use a Starfall at that point. It does a little bit more damage. The rest seemed alright, now I hope my next numbers will be better, with the Gruul-staff 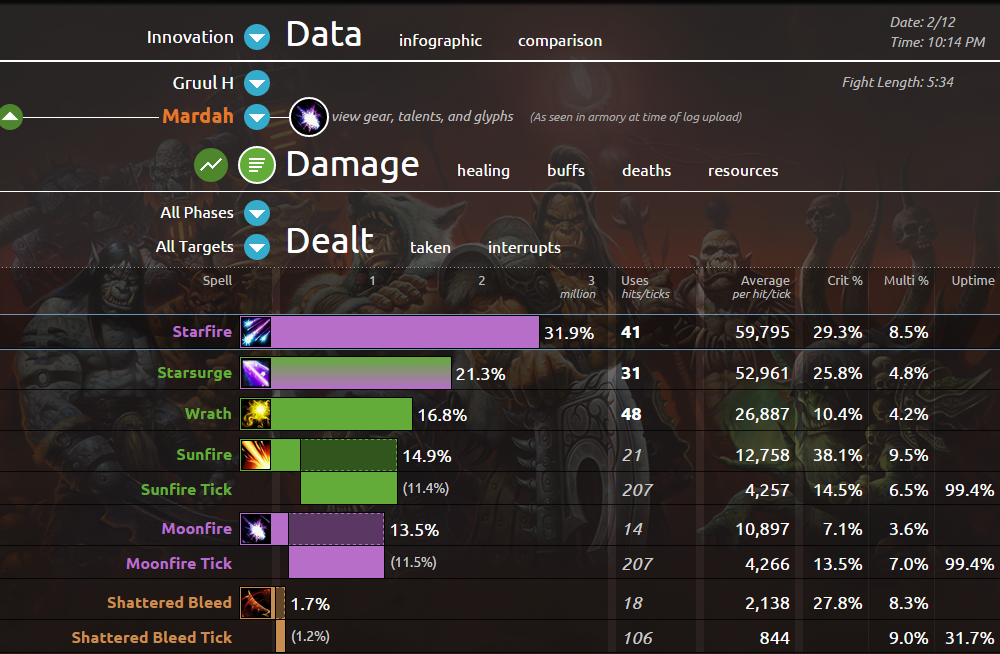 First WoWinsider closed shop (see last post), but magically did a Phoenix on us, and transformed into a crowd-funded website called Blizzardwatch, scooping up everything they hoped for and more before most of us actually figured out this transformation. So, the magazine-website is back.

On Wednesday the new phase of Patch 6.0 happened. New raid, and new world-boss, Rukhmar, a fiery bird that flies around Spires of Arak, with a chance to drop a mount, and also some 665-gear. My first kill of it was very smoothly with Gwaednerth, who scooped up some pants. The next three kills where messy, very messy.

There is this spot where all groups I was in pulled it down. It is very close to the graveyard. So it becomes a race in most PuG's to kill the boss before to much people are looking at a res-timer of two minutes. One of the kills had the bird being pulled all the way to the close-by neutral fly-path, and back again. Giving everyone time to res again I guess.

Thursday night, Innovation went into Blackrock, after finding out where they put the entrance, we went in, and cleared the trash with two drops. This was Normal, just to look at it, and how it goes. The first boss stood in his big room, Gruul.


Gruul, again... sort of. He still drops ceiling on you, and petrifies a part of the raid, but it wasn't that hard of a fight. First try he went down. For me that is a good thing, he does drop a intellect-mastery staff. I will probably get many chances to get that one...but not last night. My normal-tectus staff has to do the job longer.

Next up was Oregorger. We did one pull before the break, and found out that stacking is really stacking, because the puddles are big. During the break, people hearted to garrisons..  and started to disappear. At the end of the break, a third of our raid was swallowed by the black hole called garrison, not to return. And then one of our tanks decided to do a relog.... not a smart move.

We did continue, but with our force crippled a lot, it was more of a training-run. I found out that starfall hits everything, no LoS on anything. The big middle-puddle was not hindering me. But when we tried to use that, we found out that gnomes are to little, they do have LoS-issues with the dirt-piles. At the end of the night we had a 3% wipe, but it was decided to return there on sunday.


This is the fourth raidingweek for Innovation since the start, we still have people with warforged blues, and some with legendary cloaks (these tend to be better than the 640-cloaks). So, Innovation will do a Highmaul run again this week for the gear, although I doubt Imperator will go down, we already did a almost-full clear on heroic once before.

Tonight, it is Horde-night. I guess Beyond Redemption will also go to Normal Gruul... which brings me to a strange thing. If BR kills another boss tonight, I guess my Horde Guild is further in progression than Innovation...

They started in November 2005, so they where around for almost 10 years. This seems a long time for a internet-magazine. That was how I looked at it. They had a lot of stories, maybe one new one every 4 hours? And I read a lot of them back when I started playing in 2007. I also read Maintankadin and uses Thottbot.

Both of these sides are still around, although Thottbot is a satelite of Wowhead, and Maintankadin is still a good site for tankadins, but neither of them have stories. Another site I read a lot is MMO-Champion, but again, no stories.

All the 'big' sites I read, are not magazine-sites. They are fact-sites, or forums, but most of the times there are no stories. For those, I have a blogroll. And I had WoW Insider.

I wonder if another site will fill in the void, WoW Insider will leave behind,
the magazine for World of Warcraft has ended, and I already miss it.
Gepost door André op 19:36 Geen opmerkingen: