You no take Flame.

This Midsummer festival is a good thing to get your City Defender Achievement.

Last Monday, 4 members od SAN where just doing there usual thing, nothing. I got a little tired of all the local defense-spam. So I went to the Flame, and killed every alliance who was so stupid to actually attack NPC's. I was joined by Naofa's Tankadin, Steamynose and Wasmemon's Shammy. And it quickly turned into 'just kill all allies'.

I don't think the flame was stolen for three hours straight, and the bones kept piling up. We also had a good laugh about all the 'Elder Rise is under attack' messages. Apparantly a lot of Allies don't know their way around TB.

We also had a lot of allies that tried to escape by jumping of Spirit Rise, it's called Rise for a reason... a lot went splat below.

Most fun was yesterday. Steamy and me vs. 4-5 alliance that came with the zeppelin from Ogrimmar. We followed them on the boat, and had a Ship-fight, which we won. Outnumbered 2-1 and winning...

But I do have an apology, for the non-level-80's who where caught in the crossfire, or more likely in the 'Alliance-Kill'. And I am pretty sure I killed a former Guildmate from WEF, sorry for that... well, maybe...
Gepost door André op 10:22 Geen opmerkingen:

Some news about cata today. Path gone, more glyphs, but I am scratching my head over this one:

The current heirlooms will stop growing after level 80. There will be a whole new crop of heirlooms for Cataclysm.

They will stop growing.... so what? 10% more xp dwarves all other stats, in my humble opinion. Or does it mean that they won't work for lvl81-85? That would be, mm, not cool.

I have a lot of those heirlooms. And the idea behind it was always that I could use them in Cata, and what else to do with all those emblems. But I think Blizzard wants the same with what they did to Northrend Flying. One time without, after that, who cares.
Gepost door André op 16:54 Geen opmerkingen:

Oh, 2 weeks no blog, mm, probably because the last week of the schoolyear are very busy. So, a little rundown of what I have been doing last two weeks. 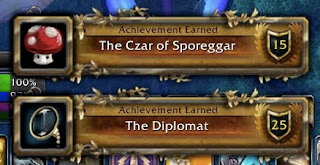 Which also means I did the Mag'Har, and the tunnel-one, which gave me a nice speech from Thrall. 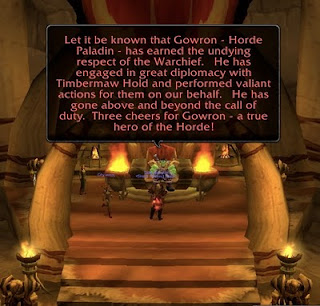 And I am also doing some other Outland-rep-grinds, which resulted in me getting a transformarion-trinket.... 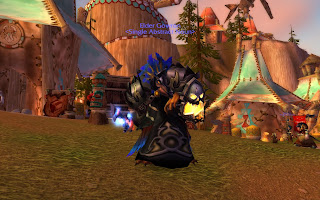 So... with all those exalted reputations, I visited some quartermasters, bought some mounts, and got a free drake. 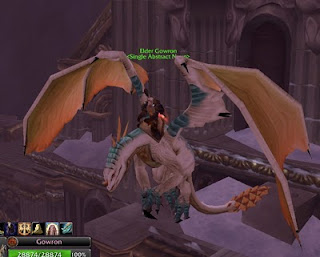 And something else happened last night. I was present in a succesfull WG, and thought, why not. I joined a VOA25. After that, about 5 people wanted to do VOA10, including me. RL left because he already did it, and left me with the reigns.... So I raid-leaded again.. well, sort of. It's not that you really need a RL in VOA.
Gepost door André op 07:47 3 opmerkingen: