After some shuffling, the following things happened:

Gowron looks like his picture on the right again.
Luaran is now an orc female again.
Cymara, my lvl60 human female warlock is gone, and is now a lvl62 orc male warlock.
and I started a priest.

Goal: get all classes to 80, before Cataclysm, that means:

should be do-able... maybe.

...and in other news, the reason for the title.

Yesterday Cymar was doing some dungeons, and I got a first.

The screenshot is from just after I got kicked. 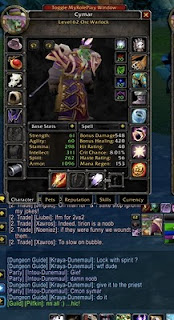 From the first boss in Underbog, some cloth hands dropped, I needed and won. It had Intel/Spellpower/Hit/Red Gem/Yellow gem/Crit and SPIRIT

Clearly, bot the Shadowpriest and the Dorktank weren't that amused by it (same server, friends?). Warlocks don't need spirit, so give it to the priest. Now there are two things.

First it was over 10 spirit.... even if locks didn't need spirit, the rest of the stats are very good, combined with the gems.
Second... LOCKS DON"T NEED SPIRIT?

Ok, I'd rather have more spellpower and hit. After that some haste, and as FOURTH best stat I'd choose Spirit...

So, take out your calculator, and find out that 2 spirit = 1 spellpower....

Right, locks don't need Spirit.
And do you really think using wtf and noob will make people more likely to hand over stuff...
Oh well, I was kicked before I could respond.
(and, yes, this time, name & shame applies here)

Oh goodness me - I'm _mortified_ The ONE time Pilf misbehaves (the results of which are _not_ going to be good buy the way) and someone takes a screenshot!

And seriously, if I gave out everytime soneome had rolled on +spirit items when I was playing priest(s) I would be permanently cussing people. Plus it's just _one_ stat - like you said...!

Yes, it is all a bit pathetic *hugs*.

and I had to chuckle at drunk Pilf in the chat :D