About maps and a lot of quests.


I have this nice thing on the left, which says what my most-played chars are doing... not much levelling on Cymar that is. I just decided that it was time to get my explorer's badge. Most of the map was already visible, just some weird spots left. I already had the achievement for Outland, and with the fact that I levelled before faster levelling and heirlooms on Gowron, most of the map was already clear, only those last spots..

I first explored Kalimdor, then I went to Northrend to loosely fly around, and get a hideous looking tabard. After that it was Eastern Kingdoms time: 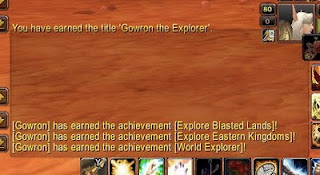 While I was flying all over the map, I was checking some other achievements. And because I was near, I also completed The Keymaster by dying in Blackrock. I also noted that I was ONE quest short in Zangarmarsh to complete Loremaster of Outland. And that this was probably so for the whole of WotLK. I quickly did an escort with a Tauren and got it... but then it started.... why not more....

Most of the time, the quests I had where deliveries/report-quests. And hard to find sometimes. In most of the zones I only had a max of 5 quests to do, probably forgot them, or never encountered them 4 years ago. I did had all the quests to do in the Undead starter zone though. I also didn't do any of the Nesingwary quests in STV, another nice bunch. In Kargath I encountered a lot of undone quests, most of them in Blackrock. Also, all the quests leading up to the Thorium Brotherhood where nice. I had bever been in that cave before. And there was a long quest-chain, bringing me all over the world, regarding the dead hero of the horde on the border of Swamps of Sorrows and Blasted lands.

After the first leg, I had a lot of little quests to complete, and I did all the quests for, and in Blackrock Depths. Luckily I have a remote. I am also trying to get as much rep for the thorium brotherhood, BS and Enchanting recipes... and of course some screenshots: 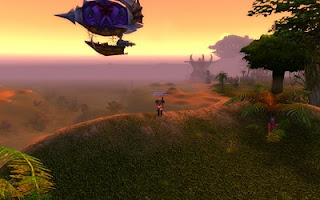 A picture of the magnificient Horde Transportation System, while I was killing some cloaked Panthers. 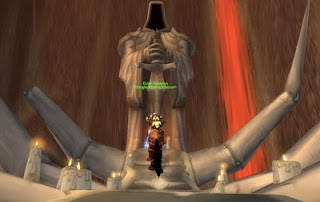 This is the Altar of Storms (I think). This is the one you see if you travel from SW to IF with airtram. It's one of the things I always wanted to see, since I flew for the first time, 4 years ago, when my first character was a dwarf hunter. Took me a while... 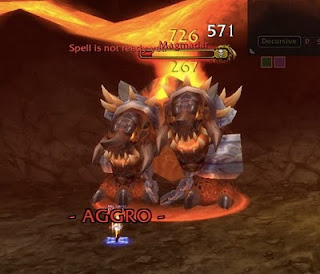 Well, I was in BRD anyway... and this two-headed monstrosity dropped
some nice pants , yes, from the banana-shoulders-set.