I have been around. 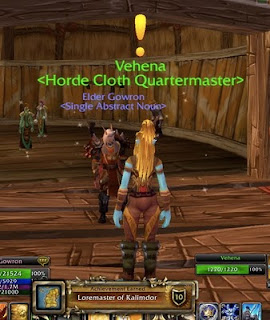 It took me two days, and in contrary to the Eastern Kindoms, Kalimdor-quests are much harder to find and do in the end. Mostly because of the whole Silithus-scene (more on that later). But, if you look at the screenie, I got the achievement by turning in cloth.... If I would have known that earlier... oh well. So, next up was Northrend: 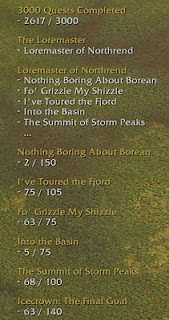 Not that much work. Apparantly I never did the Nexus- and DTK-quests.. and never been to Shozalar with Gowron. Most of the quests I had already done, and before I knew it... well actually, I did knew it was gonna happen...:

But when I got this, I still needed to Icecrown, where I got stuck on 138/140, with only one group-quest (one you can't solo due to cd's). So, I searched around, and I found that I needed to get a random drop, from a chest, which could only be opened when I was on a Daily... and it involves that Guy who always runs away before we kill him, Mal' Ganis. But, I found it...

So, I got a nice letter from Bloodhoof, a new title and a very ugly tabard, and some pictures. 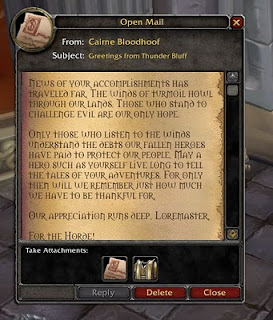 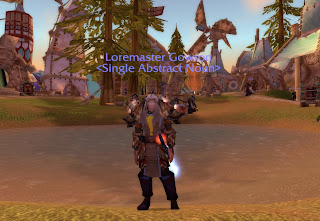 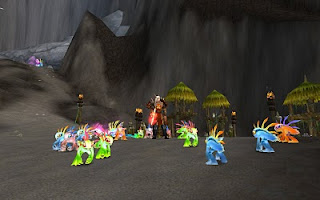 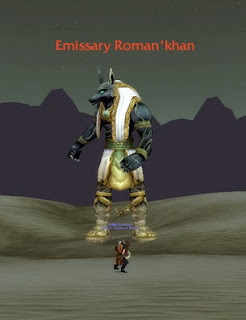 The last one, is from one of the quests in Silithus when I was working toward Kalimdor. After I completed Loremaster today, I looked at my cenarion circle rep, and thought, what the.. So, of I was, collecting texts and cultist wardrobes. Killing some lesser elementals, and finally I had enough, to summon an old-school 40-man raid boss. 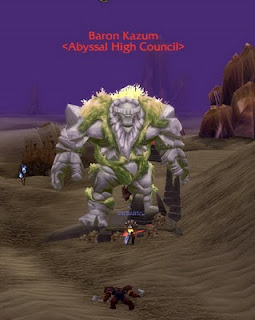 Yeah, well, raid-boss? Somewhere along the line they nerfed these. It had less health then me in my tanking gear. But, it actually dropped something nice, a purple shield. And after besting one of their biggest enemies, the druids of the Cenarion Circle/Expedition/whatever they will be called in cataclysm, bestowed me with a new title:

Diplomat isn't so hard. It's just and old fashined grind. I was happy when Shad got it though...