Normally I am a lone blogger, I have/had some feedback due to Single Abstract Noun, but mostly I keep to myself on this little piece of the internets, not mingling that much with fellow bloggers.

But when World of lae started this, well.. being althoholic and all, maybe I should Join.

So here we go,

Death Knights, the former enemies, lots of lore as they used to be a Horde-class, something to do with dead orcs orso.  DK's where the first new class introduced in World of Warcraft, and a Hero-class at that. You start at level 55 in a DK-only zone, and when you got out, you are level 58, decked out in blues, and ready to storm Outlands.

I have made several Death Knights over the years, mostly because one of the things is that you end up with 30 gold, which was very nice for lower level alts.

I fondly remember tanking in Outlands as Dual-Wield Frost. I really liked that, but Cataclysm killed that spec. That was actually the deathknell for most of my DK's. The only one levelled to 85 was Tamarian, a Tauren, during the days of SAN.

Tamarian was once shown here: "He is coming"

Tamarian is already a Tauren Male there, but I am pretty sure he use to be a human female...

At the moment I have no plans or space actually, to level another one, or to level Tamarian. He is now on Steamwheedle Cartel on a leave of absent I guess.

Actually, while looking into my Death Knights, I only encountered two others, both below lvl 60, so apparantly I deleted some of them. So, mmm, apparently I am not really a Death Knight Player.

Here he is, riding that Death Knight Horse over Ogrimmar. 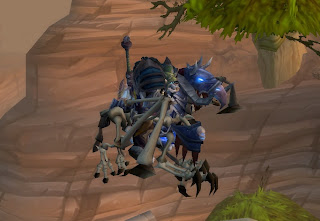 Thanks for making a post for Death Knight week. :)