The Long Wait has started

Simple, this is what I did last two weeks, it gives a nice summary. I think two weeks ago, we had a week long extra reputation from the weekly, and the Darkmoon Fair was active. Combine that with a contract, and luckily two emissaries. Gwaednerth (a.k.a. Gowron) was on the hunt, and managed to do it. I now have unlocked all the allied races....  only to be greeted by the message that starting Shadowlands, they would have been unlocked anyway, ah well.

I also concluded all of the heroic vision talent tree. So I can now farm stuff for free gem slots... maybe.. problem is, I don't really like the visions. Above two masks it basically becomes a half hour boss-fight where you cannot make to many mistakes. I did a three mask run a week ago, where everything went fine. I still had two orbs left when I went for Thrall. I forget one moment that you have to stand in the yellow circle, and poof, attempt gone, half an hour of work gone.. it is just to draining for me. And..well..do I need those gem slots (hint: see top achievement)

I am leveling some alts again with the current XP-buff, and Newid (Welsh for Change) actually made it to 110 to unlock the heritage armor. He is now in the Assault/Invasion phase, basically meaning that I do the assaults, and the three quests-chains for the campaign.

Leveling plan is simple for my alts. Do dungeons till you get tired of the Pandaria dungeons, do some questing till you hit Warlords of Draenor. Build garrison, find some followers, do some area-quests/mining/herbing till Legion. In legion, get an artifact, fly around exploring and doing all the area quests, maybe do a little normal questing. Done

At the moment I have 3 alts leveling in BFA, 2 in the TBC/Wrath Bracket, and several below 60. I may get some of them higher, but I am not in a hurry. I am looking forward to Shadowlands leveling, where it is said you can do one expansion and level up. At the moment you can probably do one or two zones before you out-level the expansion, so... looking forward to that.

And last part of this blog, Innovation downed Heroic N'Zoth 2 days ago, starting our long wait till Shadowlands. We did it in 16 pulls, which actually makes it an easy end-boss. Most of our first pulls where spend learning to not panic with the bonding mechanism. I think around pull 12 we made it solidly to the Final Phase and wiped at 23%, followed by a 31% and 25% wipe. So that didn't seem to progress.

Eva called for the last pull of the evening, with intent to get back here Tuesday, what followed was a 3% wipe....there is some progress, but flask where now running out. I think I had 7 minutes left. But with being this close, people wanted to try once again... so we pulled really for the last time...

So now Innovation can wait, we still have some members to get the Curve-Achievement for the next weeks. But basically we are done except for maybe some Mythic, but that has never been the goal. This Shadowland Expansion better come fast, or the Alpha/Beta. I have read some interesting things about it, although I am not that exited about the whole Tower of the Damned stuff yet. 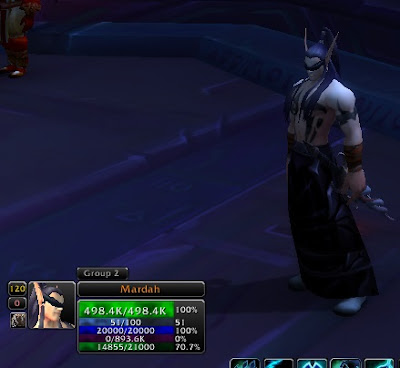